Alzheimer’s disease is the difficulty of transmitting brain signals as a result of damage to parts of the brain that a person encounters in later ages. The reason for this is the accumulation of abnormal protein in nerve cells. These accumulated proteins become inseparable from brain tissue with too much increase.

In time, the bonds between the cells that cannot differentiate begin to break, and as a result, the nerve cells begin to die by loss.

Alzheimer’s disease can be seen in most age groups as well as being seen frequently in older ages. However, with the aging of the world population, the incidence of people with this disease has increased in the society.

Alzheimer’s is a brain disorder that limits a person’s abilities and leads to their destruction. Although Alzheimer’s disease, which is a neurological disorder, manifests itself with simple forgetfulness in the first place, over time it makes the daily work of the person difficult and even causes him to forget his family members.

Diagnosing the disease at an early stage is very beneficial both financially and in terms of raising awareness of the patient. The awareness of family members should be high and the frequency of forgetting should be determined in the recent past in order to catch the details in terms of time. With forgetting, many options should be evaluated and a conclusion should be reached.

The brain is a whole with its order and way of working, and Alzheimer’s disease emerges as a result of this whole deterioration.

What are the causes of Alzheimer’s?

There are risk factors that are the subject of research, but the cause with a definite evidence has not been specified. However, the factors that play a role in the emergence of the disease and therefore trigger it can be listed.

Especially advanced age, which is associated with the disease, and the diagnosis of Alzheimer’s, which is genetically present in family members, increases the risk of catching this disease.

In addition, smoking in the hand of the person, being constantly exposed to cigarette smoke even when not smoking, sedentary lifestyle, lack of sleep pattern and stress components can also be among the causes of the disease.

The gender factor is unfortunately valid in this disease and its incidence is higher in women. Of course, it should not be overlooked that the probability of the female sex is higher as it lives longer than the male gender.

Many such factors need to be taken into account. Each option causes the individual’s susceptibility to disease, and these conditions, which cause the brain to shrink, reduce the quality of life and lead to the emergence of vital problems. 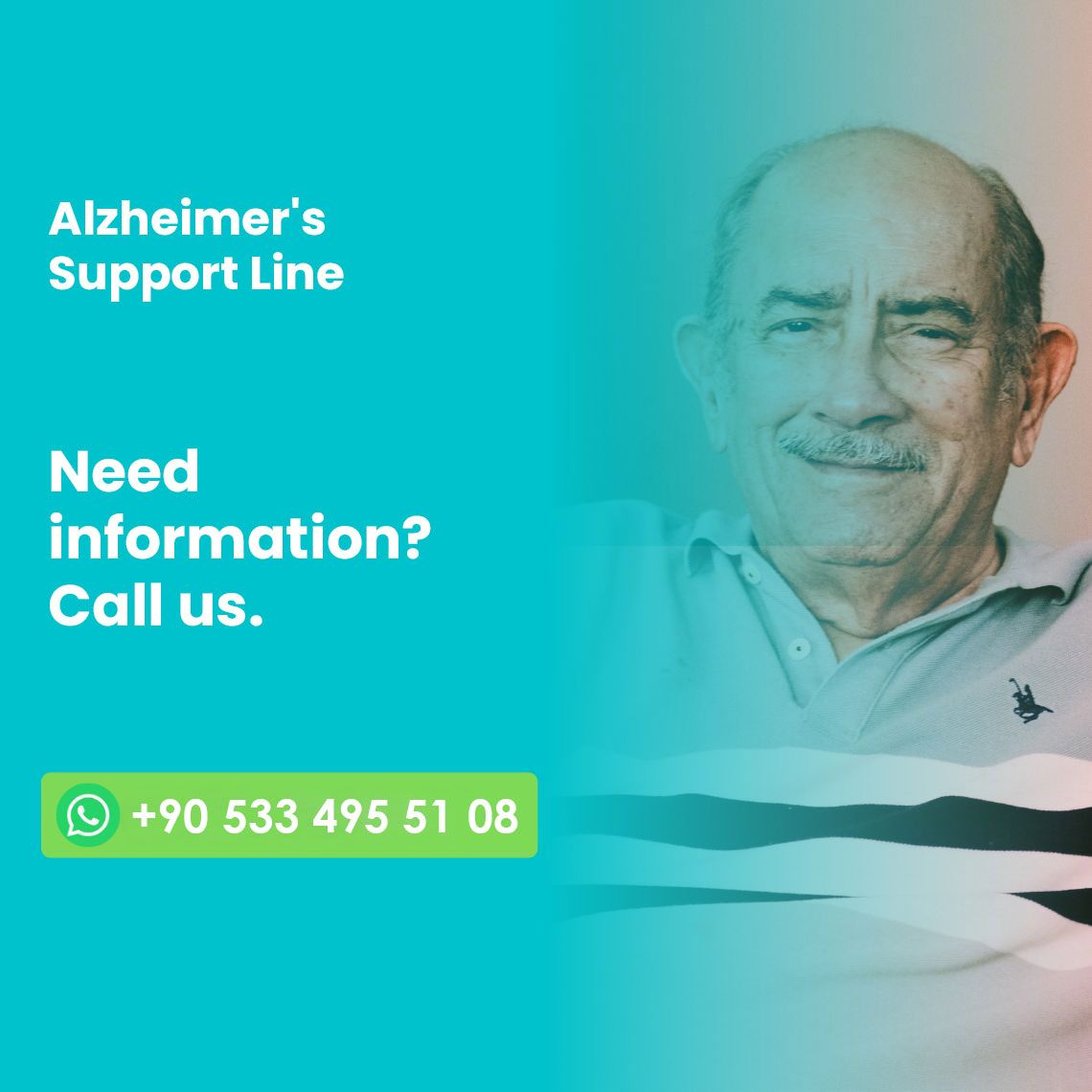 What are the symptoms of Alzheimer’s?

One of the first symptoms of Alzheimer’s disease is undoubtedly forgetfulness. Simple forgetfulness, which can also be seen in healthy individuals at first, does not affect their daily work. Especially individuals who easily direct the flow of life can suppress the situation. However, over time, people who cannot cope with the feeling of forgetting will become noticeable by their environment.

Over time, the person becomes unable to remember the places and people they have been to. Actions such as losing things, experiencing confusion, overthinking the names of objects begin to be seen.

Psychologically, these situations are observed in the state of being anxious, telling the same events in the form of constant repetition. The tendency to fall into depression is another effect. Negative moods such as introversion and being anxious are another dimension of the disease.

Although these symptoms change according to the stages of the disease, the events begin to add up in a sequence. Irritability in advanced stages requires difficulty in adapting to environments, and aggression requires being aware of the progression of the disease and difficulty in society.

While mnemonic elements such as time and date create a gap for the patient, on the other hand, they tend not to deny and accept the events that they cannot remember. The more withdrawn and psychologically resisted, the more susceptible the sick person is to the final stages, and the symptoms become more pronounced.

Inability to move without asking for support, weight loss in the body, and disorders such as eating and speaking show the last stage severity of the disease. Frequent urge to urinate. He cannot remember his recent and distant past.

How is Alzheimer’s diagnosed?

Alzheimer’s, which is not thought of by family members at first, is thought to be the forgetfulness seen in everyone, so diagnosis and treatment are delayed. In order for the treatment to be completed correctly, it is necessary to observe the findings well and to follow the routine movements of the person.

Since there is no determining factor and test for diagnosis, the issue should be approached as a whole. Some questions directed to other family members should be examined. Behavioral and memory reflexes, blood tests and, if appropriate, tomography and MR imaging should be performed by the neurologist.

In line with these results, since genetic factors may be effective, the specialist physician can make the final diagnosis and start the treatment after the gene screenings and finally the cognitive function tests known as Alzheimer’s test are evaluated.

On the other hand, it is recommended that the relatives of the patients should take psychological support as well, as they will be under stress and be faced with sad and worrying events.

How is Alzheimer’s treated?

Stopping the progression of the disease is the most important factor for a person who is decided to start treatment and has the above symptoms. In addition, it should be known that there is no definite treatment. But the observed symptoms can be slowed down, the progress can be stopped. The priority for the person with Alzheimer’s disease is the home environment.

Notes should be added to certain parts of the house and read books should be provided in order to remember the forgotten issues by taking into account. In order to be an activity, programs such as chess and puzzles can be made to strengthen memory.

Factors such as staying away from factors that affect the brain such as radiation, quitting alcohol and tobacco use, and listening to music will positively affect the course of the disease.

In order to stay away from stress, it is necessary to spend a lot of time with family members, to refresh memories, and to do activities that will enable the brain to work actively. Steering the patient in this way in a consistent manner will enable him to overcome it in advanced stages.

Attention to nutrition, vitamin supplements and fish consumption will be beneficial. Cereal products, which are also effective in the work of the digestive and nervous system, should be taken into account.

While it will make him feel safe during the time he spends with his family members, the rate of falling into psychological disorders will decrease and the probability of responding to treatment will increase. People who have not been diagnosed and who show symptoms should not neglect themselves as soon as possible and starting treatment will facilitate early diagnosis and treatment.

While communicating with the patient, positive and short sentences should be established, and it should be left among the options rather than waiting for him to comment. In situations where he tells different situations beyond the truth, he should be sympathetic and should not make an effort to change his thoughts.

The reason for communicating beyond effort is not to stress the patient more and not to make them feel inadequate. The main goal in conversations is to try to make him happy, to support him and to show that he is with him.

After the patient and his relatives have done their best, the rest is left to the doctors and the researches. Experiments continue to be made to find drugs that will regenerate cells, disrupt the function of nerve cells and eliminate the causes.

Applications aimed at eliminating the causes, on the other hand, aim to reach a definitive solution as a treatment against Alzheimer’s disease in time.

How is Alzheimer’s Onset Diagnosed?

Due to the serious pace of life and other factors, it is normal for young individuals to ignore and/or forget some issues. However, the forgetfulness of older individuals is not due to these reasons. Alzheimer’s patients who follow the same path as Dementia, also known as Dementia; They may forget names, addresses, places and even where they are.

Alzheimer’s, which has symptoms that go beyond forgetfulness, makes the person feel that there is a problem. For this reason, it would be beneficial for individuals who feel that they have memory problems in general, to apply to health institutions. In this way, medical measures can be taken in the course of Alzheimer’s and/or Dementia disease.

What should I do to beat Alzheimer's disease?

Is Alzheimer's caused by sadness?

From whom does the Alzheimer's gene pass?

It is known that the gene that contains the risk factor in Alzheimer's disease is APOE and this gene is often passed on from the mother. As a result of studies conducted in different populations, detailed studies on the gene have been made. In addition, it would not be wrong to say that the statistics are in this direction, although there is still no certainty about the Alzheimer's gene being passed on to the person through the mother.

Does Alzheimer's go away on its own?

Alzheimer's is one of the rare diseases that does not have a definitive cure, and the chances of it going away on its own are negligible. For this reason, instead of waiting for Alzheimer's disease to go away on its own, it is necessary to see a specialist doctor as soon as possible. With symptomatic treatment and behavioral applications, it is possible to slow down the rate of the disease under the control of a physician.

Why do Alzheimer's patients not bathe?

The majority of Alzheimer's patients do not want to bathe in the later stages, although there is no definite reason for this situation, it is estimated that it is caused by being at home all the time. However, after a certain point, it is necessary to take a bath. In such cases, convincing Alzheimer's patients to bathe can be a very difficult and long process.

Can Alzheimer's disease be stopped?

Although the progression of Alzheimer's disease can be slowed down by stem cell therapy, no cases have been found in which it was stopped. Therefore, there is no evidence or evidence that Alzheimer's disease can be stopped. However, it is possible to take some precautions and apply some treatment methods to slow down the course of the disease. In this way, it is possible to prevent the appearance of symptoms by reducing the speed of progress.

What smell can Alzheimer's patients not smell?

” NeuroUp™ is a non-invasive treatment that uses Transcranial Pulse Stimulation (TPS®)
technology to improve the quality of life of those with mild to moderate Alzheimer’s.”